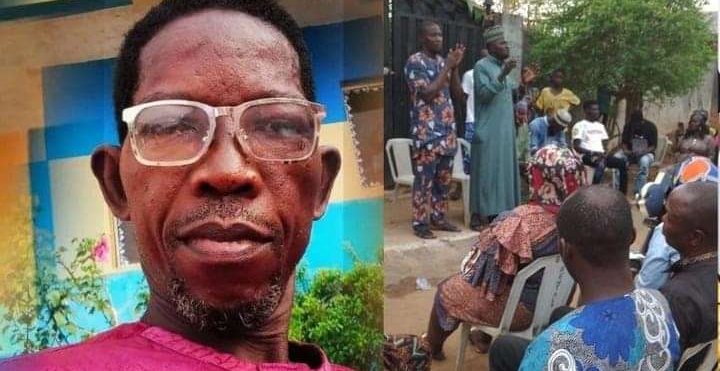 The actor, known for his comic prowess in the Yoruba subset of Nollywood died on April 1 and was buried on the same day according to Islamic rites amidst tears and gnashing of teeth.

The children of the deceased were evidently still in shock at their father’s demise, even as his colleagues and well-wishers trooped to his house to pay their last respects to the comic actor.

His first son, Junior, revealed that his father had an unfulfilled dream in the movies he had produced but were yet to be released to the public. He told Saturday Beats:

My dad believed in me that I can act. I used to be nervous and scared. He had four children. He was sick before he died. He told my younger brother that we should not fight the doctors before he passed on. He was taken to Ikorodu General Hospital where his colleagues showed up and they really tried (their best for him). I appreciate their efforts because they stood by him. I pray my dad’s soul will rest in peace. My dad already created some things for us (his children) before he died. Some of his films have not been produced, and he was supposed to release them before he passed on. I just have to make him proud wherever he is. That was what he told me last year.”

Another of the late actor’s children, Victoria, stated that they would appreciate whatever help they could get, particularly from the government. She said:

“In any way the government can support us, they should. Even if it is school fees, house rent or job opportunities, we would appreciate. Three of us (siblings) are still in school.”

Corroborating his brother, one of the deceased’s sons, Muiz:

“My dad had a movie he was supposed to release in April. He had finished producing it.”

In his tributes, actor and president of the Theatre Arts and Motion Pictures Producers Association of Nigeria, Bolaji Amusan, aka Mr Latin said:

“He was a brother, a co-comedian, an active industry player, a very talented actor, and we were very close.”

“I learnt he was sick yesterday (Thursday) and he was rushed to the hospital where he died. His last moments on earth were fulfilling. He was at a function three days ago, and was on location about two days ago. It was a huge shock that we could lose somebody like him.”

“Dejo Tufulu was a raw actor par excellence with serious respect for professional ethics. I never saw him come late to set or rebel against anyone. He was always supportive and reasonable. He was a good man.”

“He was a close friend and a senior colleague.”

On how he feels that much is now being said about the late actor unlike in the last days of his life, Afod said:

“I celebrate him every time. I don’t know about those that don’t talk about him. Anyway, that is life for you.”

He also said that it was too early to say if there were plans to immortalise the late actor. He added:

“I don’t think that is what we should be talking about now. It is a step after another. That is too early. I spoke to one of his children not long ago.”

Fans and colleagues have also commented to pay tributes on social media.