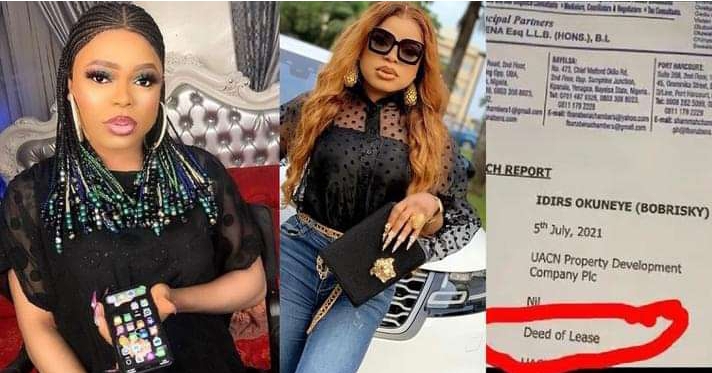 Nigerian crossdresser, Bobrisky, has faced backlash after mistakenly posting a document that purports to show that his much-hyped N450 million mansion was rented.

The self-styled billionaire girlfriend and mummy of Lagos got eyes rolling after he announced that he’s now the proud owner of a N450M mansion in the heart of Lagos.

While Bobrisky is planning a housewarming party for the mansion on June 19th, netizens have concluded that he is not the owner of the property as he claims, after seeing a document he uploaded online.

Bobrisky shared a snapshot of a document which had “deed of lease” on it on Instagram and captioned it,

Thanks to my lawyer for app his effort he made buying dis home. Only Landlords and landlady understand this document. Tenant no dey sign app dis document here so they don’t understand. 19th I’m posting full pic of the house. Congrats to me. Four hundred million is a whole a lot”.

Reacting to the post, Bob’s followers pointed out that “deed of lease” is not an outright sale, which means that Bobrisky’s acclaimed mansion is rented.

See some comments as you scroll,

This comes after Bobrisky shut the mouth of those claiming she’s now broke as she shares her jaw dropping account balance.

The 30-year-old crossdresser shared a screenshot of his bank balance on his Instagram page.

“I’m not covering the balance just to shame my haters wey talk Bob don broke. I said my coming back will be bloody!!! It’s time for you all to watch me so sit down and get yourself a nice pack of popcorn with chilled coke. Notice dis is not the only account I have. I’m running 7 account conveniently.” He wrote.