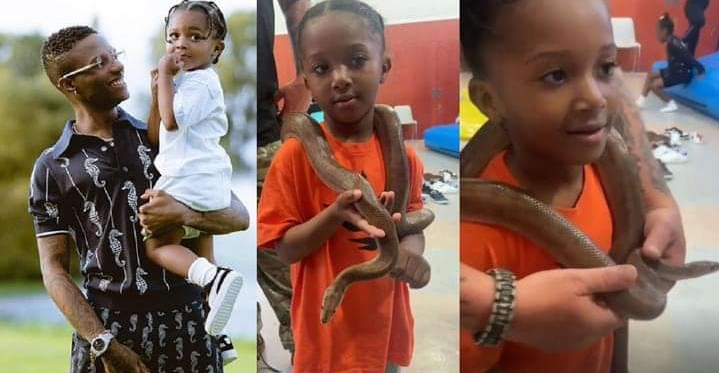 Nigerian superstar singer, Wizkid’s 3-year-old son, Zion, has been lauded online after a video showing him bravely clutching a snake was shared online.

Zion, who is thought to have visited a park with his mother, Jada, is seen playing with a snake in the now-viral video.

The snake handler carefully placed the snake on Zion’s body, and Zion appeared unfazed as the snake crept about his body. He held the snake at one point and smiled at the folks who were filming.

See also  Ladies & Gentlemen Behold The Owner, I Can't Hide It Anymore -Mercy Says As She Reveals Her Lover

Meanwhile, a while ago, a video shared online shows the moment popular singer, David Adeleke popularly known as Davido, screamed for help after a pangolin was placed on him at an event.

The singer made a guest appearance at the event organized by a non-profit organization against animal extinction, Wild Aid, today January 6.

During the event, a pangolin was placed on Davido’s shoulder for photo ops however he was frightened by the little animal and asked for it to be removed from his body.

In the hilarious video, the 29-year-old singer is seen screaming out of fear as the animal crawled up his arm.

However, the Nigerian music superstar was able to overcome his fear of pangolins as seen in a video he shared on his Instagram story.

He was later seen posing with the animal like a professional animal whisperer.