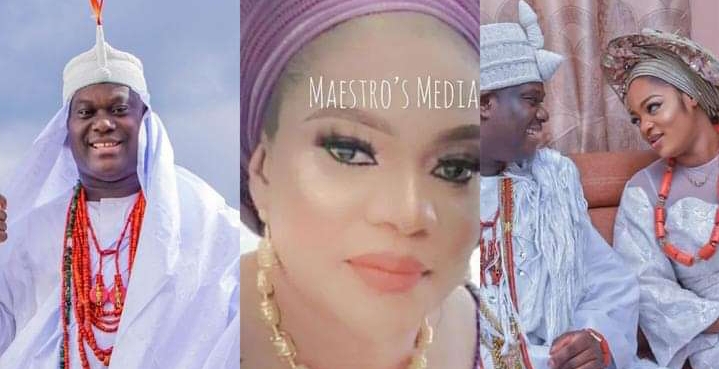 The Ooni of Ife, Oba Adeyeye Ogunwusi, has reportedly gotten over his estranged wife, Naomi Ogunwusi, as he takes a new wife.

According to the reports making rounds online, the Ife royal is set to tie the knot with Mariam Anako, an Oil and Gas executive.

Kemi Ashefon discloses that Ooni’s alleged new wife has vowed to be the monarch’s last wife.

Mariam Anako who works in NestOlil, is a native of the Ebira ethnic group in Kogi State.

She is said to have been of immense help to the Ooni and this must have endeared her to him.

Netizens who reacted to this development were not shocked by the King’s new move.

Although Ooni has yet to make an official statement regarding this, the report claimed the new wife has yet to enter the palace.

This report is after Ooni of Ife and Queen Naomi Silekunola’s separation, which rocked the internet.

Nollygistvibes recalls that Queen Naomi shocked the fans of the Ife royals when she renounced her name and role as the Queen of Ife.

The beautiful mother of one stirred mixed reactions online when she accused the monarch of being two-faced.

“I did my best to endure and make it work; many times, I smiled through the struggle, but I have finally realised I had just one assignment, my son, and when God is done, He is done. He chose Saul to be king, and when He was done, He told the prophet Samuel I have moved on. Religion was never an issue between us; please refer to my interview on News Central TV. Instead, His Majesty has a picture he would love the world to see and perceive him as and another one which is his true self.

See also  BBN's Sammie says, "When I was going for BBN, my mother provided me only 900 Naira."

Today I announce the beginning of a new dawn and the close of a chapter. Today, I am a mother to God’s unique gift. I am no longer a slave to my thoughts of perfection. I, at this moment, announce that I shall no longer be referred to as wife to the Ooni of Ife or as Queen of Ile-Ife but as the Queen of the people and mother of my adorable Prince.”