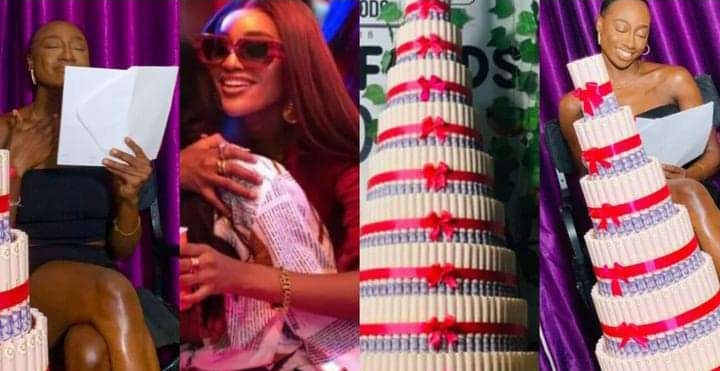 Big Brother Naija ‘Level Up’ evicted housemate, Doyin David was brought to tears over the sweet gesture from her co-housemate, Beauty Tukura.

Beauty, who was disqualified from the reality show had surprised Doyin, her bestfriend and confidant while in the house, with a huge money cake.

Doyin, who is yet to reunite with Beauty, was treated to a huge surprise from the reality star, who has been keeping a low profile since her disqualification.

Beauty Tukura surprised Doyin with a huge money cake and an emotional letter which brought Doyin to tears.

In the video, Doyin was seen preparing for her media rounds, when the surprise gift came in. The reality star couldn’t hold back her tears as she broke down over Beauty’s thoughtful act.

There is no doubt that Beauty has an exceptional heart and even evicted housemate, Cyph attested to it.

Cyph had penned an emotional note to Beauty Tukura over her disqualification.

Recall that Beauty was disqualified for an altercation with Groovy during Saturday’s party.

The Miss Nigeria beauty queen threw the house into chaos when she fought dirty with her supposed boyfriend, Groovy, for dancing with Level One housemate, Chomzy.

All housemates’ efforts to calm her down were futile as she went on to damage Biggie’s property and disobeyed the house rules by assaulting Groovy.

As punishment for her action, the ex-beauty queen was disqualified from the show.

However, her disqualification from the show had brought to light the true nature of other housemates.

In an emotional note to her, Cyph noted how it was painful that the reality of life is biased based on opinions, perceptions, and conclusions of what people see than the experience itself.

He stated that now it became clear that all signs that led to her emotional outburst were true and that was when people get to see the bigger picture of how humans are.